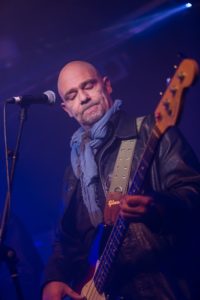 Bass players come and bass players go, that’s what bass players do, but this time, we didn’t see it coming (or rather, going). A mere three months after joining the band, Orlando Milan came to the conclusion that Diesel’s plans for a Canadian tour would prove incompatible with his newly acquired day job and decided to chuck it in the bucket, throw the towel in.
We’re awfully sorry to part with this world class singer and player, but respect Lando’s decision and wish him all the luck in his new career.
A bit of a set back, but once again, Lady Luck was in Diesel’s corner and gave us Matto Kranenburg, a gentle giant from the city of The Hague. Matto, who is equally proficient on electric bass, double bass, guitar and vocals, honed his skills in top notch acts like KANE, SEVEN and SHOCKING BLUE.

Matto also teaches guitar and bass, does school concerts and coaches bands. Matto is a multi-talented musician and covers an awful lot of ground. All in all, the perfect choice for an eclectic band like Diesel.

Check out our new single on our home page. Release date: March 24, 2017. You can find the lyrics here.

Diesel’s Sausalito Summernight was a radio hit in the United States, Canada and the Netherlands, peaking at #25 on the Billboard Hot 100 and at #1 in Canada. Thirty five years after its release, this classic road song is still getting regular airplay on American, Canadian, German and Dutch radio stations and has resided in the Dutch Top 2000 of All Times for many years. Diesel’s first hit single Goin’ Back to China peaked at #4 in the Japanese international chart and at #1 in the version of singer Yoko Katori.

Rekindled interest from several countries has prompted founding members Rob Vunderink and Mark Boon to join forces and fire up the old diesel. This means that the two original lead singers/guitarists/composers responsible for Sausalito Summernight and two thirds of the songs on Diesel’s debut album Watts in the Tank, are on board again.

For a sound and solid stage performance, Rob and Mark have called upon three seasoned rockers.

The Diesel lineup is:

Orlando Milan has played with bands and artists like Cashmere, Delrose and Margriet Eshuijs,  René Meister played in Het Goede Doel and wrote the #1 hit single Zelfs je naam is mooi. Ron van Elswijk is a relentless powerhouse whose talent will no longer go unnoticed.

The band is ready for the road. A new album is in the works.